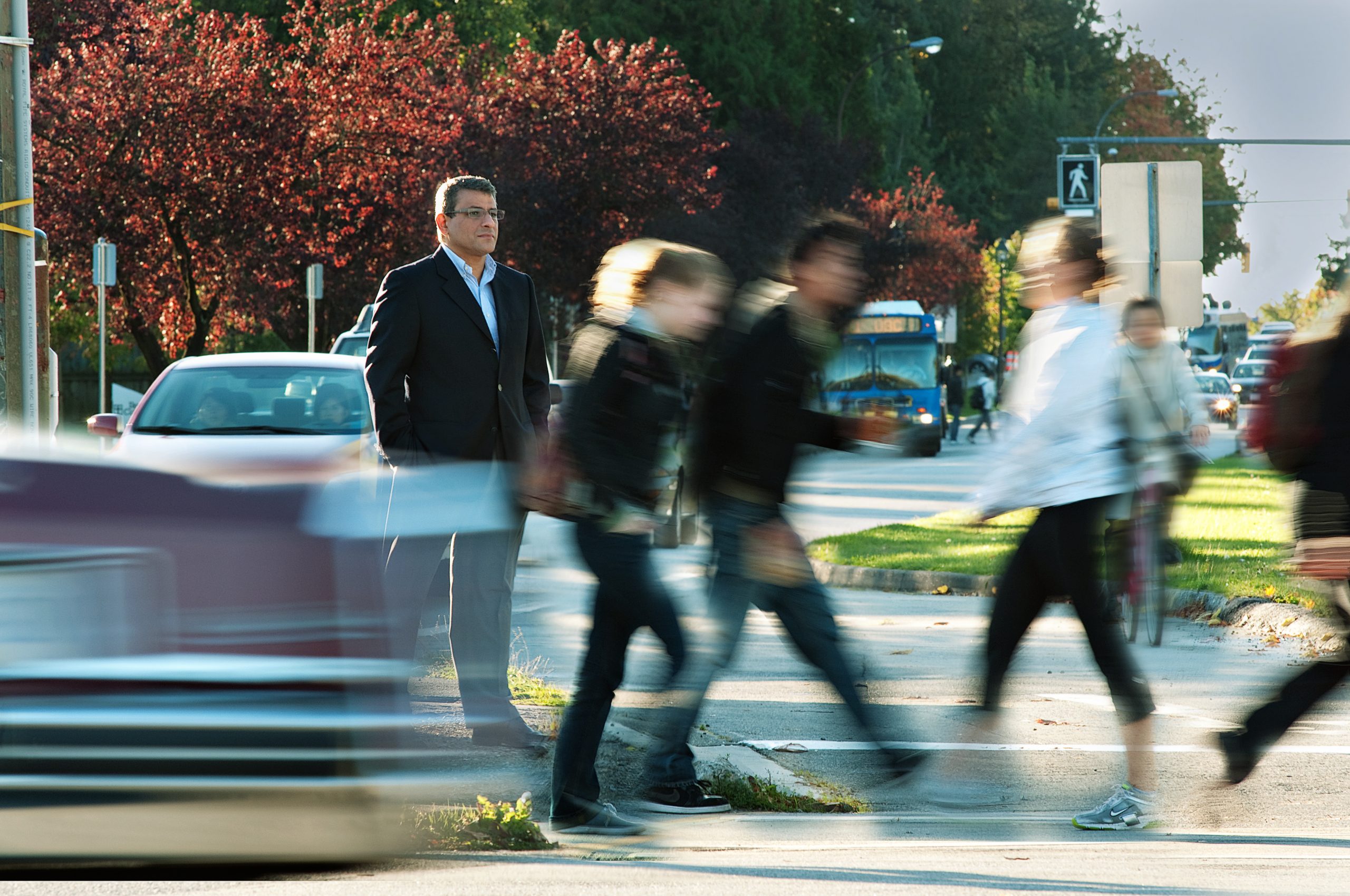 Home > Hitting the road, safely: Q & A with Tarek Sayed

Hitting the road, safely: Q & A with Tarek Sayed

As vacationers embark on summer road trips, a Civil prof talks about new ways for making the highways and byways collision free

Tarek Sayed is a road safety engineer in the Faculty of Applied Science. He uses automated video analysis techniques at intersections to make roads safer for pedestrians, cyclists and drivers.

Collisions happen for three reasons: vehicle failure, driver error, or unsafe roads.  About 95 per cent of collisions involve driver error. However, road engineers think road improvements can significantly reduce the frequency and severity of collisions even when driver error is the cause.  For example rumble strips were added to the majority of highways in Canada to alert drivers when they are going off the road. We did a study that shows rumble strips can reduce off-road collisions by 22 per cent. There are significant benefits but little cost.

You advocate for a more proactive approach to safety design. What does this mean?

Roads were getting safer for many years, and accidents were going down, but now we’re seeing a smaller yearly reduction in accident rates.

Historically our approach to road safety analysis was reactive. We relied on collisions to identify problems in the road. But collisions are relatively rare. There might be 20 collisions per year at one intersection, so we have to wait a long time to collect enough data to come up with a solution.

Near misses occur more frequently and they are highly related to collisions. Our approach is to study near misses and our research is leading in this area. It is a proactive approach. We can assess road safety before problems are allowed to emerge.

How do you study near misses?

We’ve used advances in computer vision techniques to automate the process of studying near misses. Video cameras are set-up at intersections and other road locations and then we identify where there could have been a collision if a pedestrian, cyclist, or driver didn’t react to avoid it.

Where has this been used to make roads safer?

We’ve worked in 12 countries in the Middle East, the United States, Asia, and Europe.

In New York we observed an intersection with a high volume of pedestrian traffic. Vehicles making a left-turn had to wait for a gap in pedestrian crossings and it resulted in lots of conflicts and lots of vehicles being rear-ended. Now they’ve changed the signals so pedestrians have a chance to cross and then the cars have their chance. The same traffic signal changes have been introduced at three intersections in Surrey and we are evaluating their safety performance.  In Vancouver, the speed limits at the intersection near East Hastings St. and Main St. were lowered as a result of our video analysis. We saw many traffic violations at this location, especially from pedestrians. The intersection is now a 30 kilometres per hour zone.

What do you think about proposed increases to speed limits on highways in Canada?

In my opinion this is not a good idea. Raising speed limits, especially on highways, leads to less safe conditions.  Speed contributes to one-third of all collisions. It’s the most important factor contributing to road injuries and fatalities.

That’s because at high speeds, stopping distances are longer, and the opportunity for skidding while taking evasive actions or negotiating a curve is much higher. Considerable research shows that the severity and frequency of collisions is directly related to the speeds of the roads.

What do you think of the claims that driverless cars could make roads safer?

If we can fully automate the process, we can reduce collisions. However there are many challenges to this approach like privacy issues and cost. In many cases you need to track all the vehicles and all the users on the road. What happens when you have interactions between vehicles that have the new technology and ones without it? We’re starting to study this using simulations at UBC.