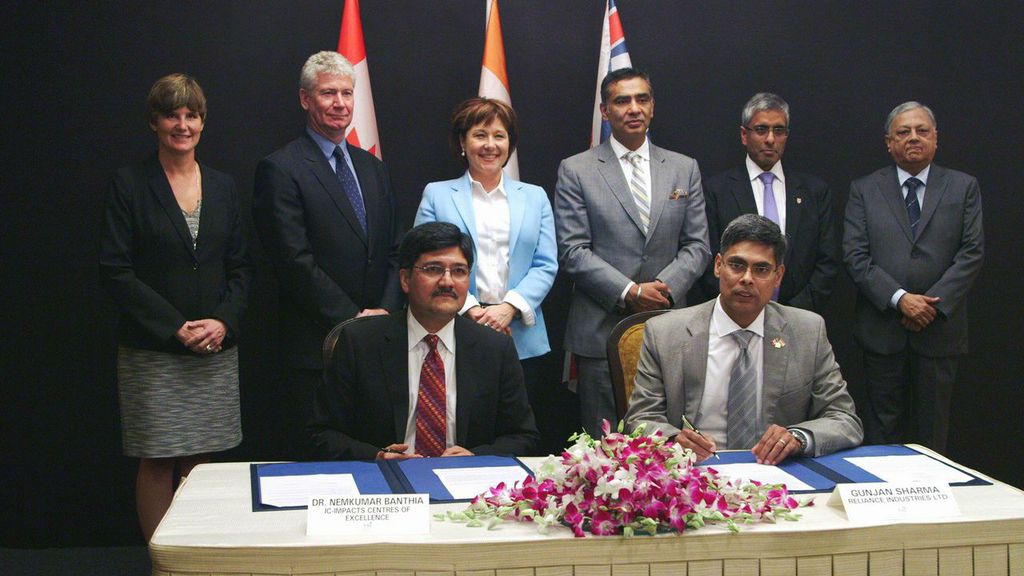 The following is excerpted from the IC-IMPACTS report on the recent trip to India:

Nemy Banthia (CEO, IC‐IMPACTS), Sue Roppel (COO, IC‐IMPACTS) and Madjid Mohseni (RMC, IC‐IMPACTS) travelled
to India in October, intersecting with both the BC Premier’s Trade Delegation and Federal Minister Fast’s trip to India.
The BC Delegation was also accompanied by two of IC‐IMPACTS Board members – Dr. Arvind Gupta (President and
Vice‐Chancellor, University of British Columbia) and Mr. Stewart Beck (President, Asia Pacific Foundation of Canada),
and 2 other Board members from India – Ms. Malini Sen (National Education Editor, Times of India) and Professor
Gautam Sen (Chairman, College of Surgeons of India) – who joined in on several events. Over the period October 9‐
18, visits occurred to Varanasi, Delhi, Bangalore, Nagpur and Mumbai. Overall an excellent trip resulting in 4 signed
partnership agreements, two successful workshops and significant progress being made in IC‐IMPACTS partner
communities of Thondebavi (Karnataka) and Nagpur (Maharashtra). Progress is being made on exploring
partnerships with community‐focused organizations – the Aga Khan Foundation and Basix. Additionally, from a public
affairs perspective IC‐IMPACTS has developed a good working relationship with the BC Government as an outcome of
the trip and is now working in several directions with them. Minister Fast is also now more fully aware of ICIMPACTS
activities on the ground in India.